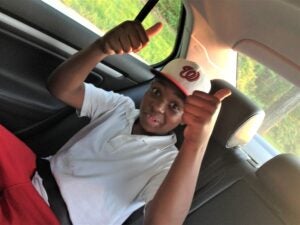 In late May, former Youth Baseball Academy participant Antwuan Roach died of a gunshot wound. Though too old to enroll formally in Academy programs when the facility opened, Antwuan was a frequent participant in activities and a constant supporter to his younger siblings who were enrolled. A shy but caring young man, Antwuan had a love of baseball – playing for the Sousa Cobras in middle school and practicing with Gonzaga High School players. He also developed a special relationship with former Nationals Player Ian Desmond, who served as a mentor to Antwuan and ensured he received critical academic support. At the time of his death, Antwuan had just earned his high school diploma and completed a job-training program.

Antwuan was a special member of the extended Nationals family, and we mourn the loss of a precious life cut short. Read more reflections on Antwuan’s passing from our CEO Tal Alter, including details about a new campaign in his memory.

More from our CEO

Nationals Philanthropies has launched a $150,000 fundraising campaign to support the renaming of our rooftop observation deck at the Youth Baseball Academy. The Antwuan Roach Memorial Observation Deck holds stunning views across the sweeping vistas of the Academy and surrounding community. A gift today in memory of Antwuan helps us meet our fundraising goal by his birthday on September 15. Every dollar delivers life-changing impact through Academy programs that foster positive character development, academic achievement, and improved health among youth living in underserved communities.
Donate Now